All of us in New Orleans were amazed this year by the expedient manner in which the city readied itself for the onslaught of Super Bowl visitors. I understand that consultants from Disney were sent in to teach us how to host this event, but I don’t think we needed them.

I will acknowledge that things happened very quickly. The street car line was re-routed and all of downtown detoured around the “progress” for about a year… but still, it was fast and efficient, and completed in time for the big day.

The same can be said of the magical disappearance of homeless persons and grafitti beneath the overpasses. Don’t get me wrong… now that Super Bowl has come and gone, our friends with signs have returned as if nothing happened; but any visitor passing through a few weeks ago would have asked, “What homeless problem?” if anyone had mentioned such a thing. Of course, having been trained by Disney, I don’t think anyone did.

I kind of missed them. 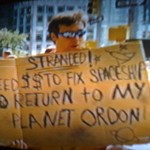 Homeless persons in New Orleans have a sense of humor, too. 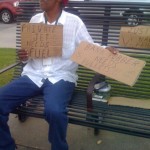 But still, now that the spotlight has turned away from the Big Easy… what is being done about the problems that remain below the surface? We still need improvements, and what will motivate the Powers That Be to continue with this agenda of civic improvement?

A friend who is in town working on the last season of Treme told me an inspiring story. In the Uptown area, neighbors were fed up with a monster pothole that threatened the alignment of their cars and swallowed small dogs on a daily basis. To no avail, they cried out for help and repairs to the street, only to be ignored. A pothole Uptown is not really newsworthy… so these savvy residents did what any resourceful New Orleanian would do. They used the materials at their disposal and fixed the pothole themselves. How? they filled it with Mardi Gras beads.

Apparently it worked very well. The plastic beads, readily available in any New Orleans home by the ton, created a solid and lasting solution – and a flat surface – and cars packed them down until this sparkling patch melted down a bit and became a permanent part of the road.

This is a true story. And now I’m told it will also appear in an upcoming episode of Treme… real life providing inspiration once again.

Behind our office in the “Alley of Sighs,” I was encouraged to see that our citizens are taking responsibility for the ongoing progress on the infrastructure by taking matters into their own hands as well. A disturbing little sinkhole appeared in the alley about a month ago. The surface opening is about six inches in diameter, but it appears to go WAY down. It’s kind of creepy. I park my car next to it every day in hopes that it may swallow it whole and I will get a free new car.

But no. Someone has fixed it. Not the city. Someone who cares enough to recycle and repair the roads in the best interest of the city. And also, finding a way to finish off a bottle of booze in an alley and call it “taking responsibility” for civic improvement. I’m proud to see it, and glad to see that our neighbors and friends are not waiting around for officials to solve the problem. Kudos, New Orleans.